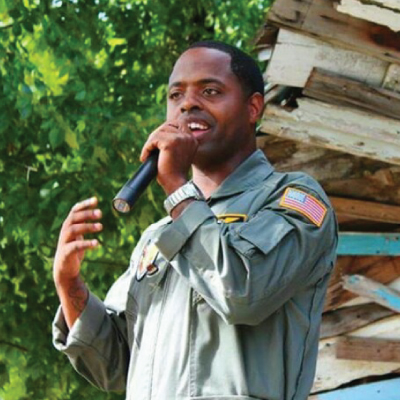 Kenneth is a native Houstonian and currently a United States Navy Veteran. While in the U.S. Navy his job as an Antisubmarine Warfare Systems Operator – Acoustic took him around the world as he searched for, detected, localized and tracked nuclear and diesel submarines using acoustic sound propagation energy. After separating with an Honorable discharge, he graduated from Seward County College in Kansas with a 3.5 GPA and a degree in Computer Information Systems.

Upon returning to Houston, he founded Universal Elite Aerospace in November 2013, an Aviation S.T.E.M. Outreach program that works with youth and teens, motivating and inspiring them to exceed expectations in the aviation and aerospace sector. Battling through being bullied throughout school, homelessness, depression, coming from a poverty stricken home and neighborhood, he still found a way to be successful!

December 2016 he was awarded the role of Director of Education and Outreach for the new Lone Star Flight Museum in Houston, Texas creating aviation education, S.T.E.M. curriculum, field trips and more for the 1.2 million youth throughout the Greater Houston and Harris County area. In the first two years of its opening, more than 20,000 students visited and was introduced to the many rewarding careers offered in the aviation industry.

December 2018 Kenneth made a career change as he was selected as 1 of 11 U.S. Military Veterans from a pool of hundreds of decorated candidates, for a new flying initiative in Texas, powered by the U.S. Department of Transportation called ‘Forces to Flyers’. This program is designed to address the country-wide pilot shortage while working to provide veterans with the skills and training needed to become commercial airline pilots. Upon completion of the program, Kenneth will be a Certified Flight Instructor – Instrument (CFI – I) and will continue his work inspiring, motivating, training and introducing young people to the aviation industry.